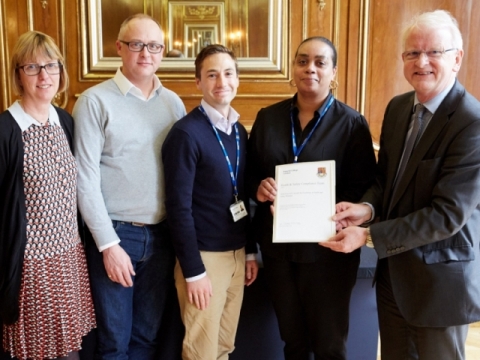 Jennifer Welch is among the winners of the Provost's “Award for Excellence in Safety”.

The awards were presented by Professor James Stirling, Provost of Imperial College.

Now in its fourth year, the scheme was set up to recognise College members whose endeavours have resulted in significant improvements in health and safety during the year.

Awards were given on an Individual and Team level. The NHLI Health and Safety Compliance Team, of which Jenny Welch is a member - along with Gareth Hyde, Lisa Ingram, Gill Martin, Hime Gashaw and Michael Johns - were joint winners, together with the Engineering Alloys Research Team, Department of Materials.

Main: Representatives of the Health and Safety Compliance Team receive their certificate.